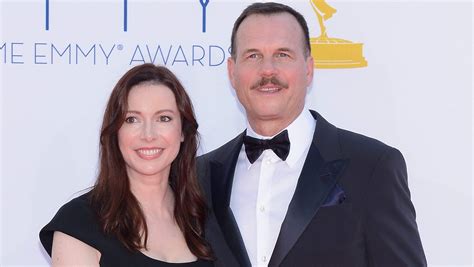 Bill Paxton and Louise Newbury’s 31 year relationship is considered one of a kind in Hollywood. They were one of the rare couples that proved that if the love is pure, and compromises are made, a stable and healthy marriage is not very difficult to have.

Bill, who passed away in 2017, at the age of 61,  due to medical complications after an open heart surgery, was survived by his wife and two kids. Bill and Louise have two kids together, James, who was 23 at the time of Bill’s death and Lydia, who was 19. James is an actor and worked with his father on CBS’ Training Day. Lydia was a university student at the time of her father’s death.

Bill and Louise were one of those rare couples in Hollywood who were happily married for 30 years. Paxton had married Louise in 1987, seven years after he divorced from his first wife Kelly Rowan.

Paxton had met Newbury for the first time on a bus in London. In an interview, he revealed that she was just a teenager when he met her for the first time. “She knew me when I was struggling. She was a student. We met on a bus in London. I’ve seen her give birth. I was with her when her father died. Then we mixed our blood watching these two kids grow up.” the Screen Actors Guild Award-winning actor said. They had tied the knot on May 12, 1987. Paxton was an actor, musician, producer, director, and writer, born in Texas. He worked in a number of movies like The Terminator (1984), Commando (1985), Near Dark (1987), Tombstone (1993), True Lies (1994), and Apollo 13 (1995)  and was nominated for Golden Globe Awards multiple times for his role on the HBO series Big Live (2006-11), for a Primetime Emmy and a Screen Actors Guild Award. The last film he appeared in was THE CIRCLE, which was released a couple of months after his death.

Bill was a dedicated father and husband. He passed on his love of acting to his son, James, and even at age 61, was still very involved in projects.

Paxton’s family noted his dedication to his wife and children while announcing his death through a statement. “A loving husband and father, Bill began his career in Hollywood working on films in the art department and went on to have an illustrious career spanning four decades as a beloved and prolific actor and filmmaker” read the statement.